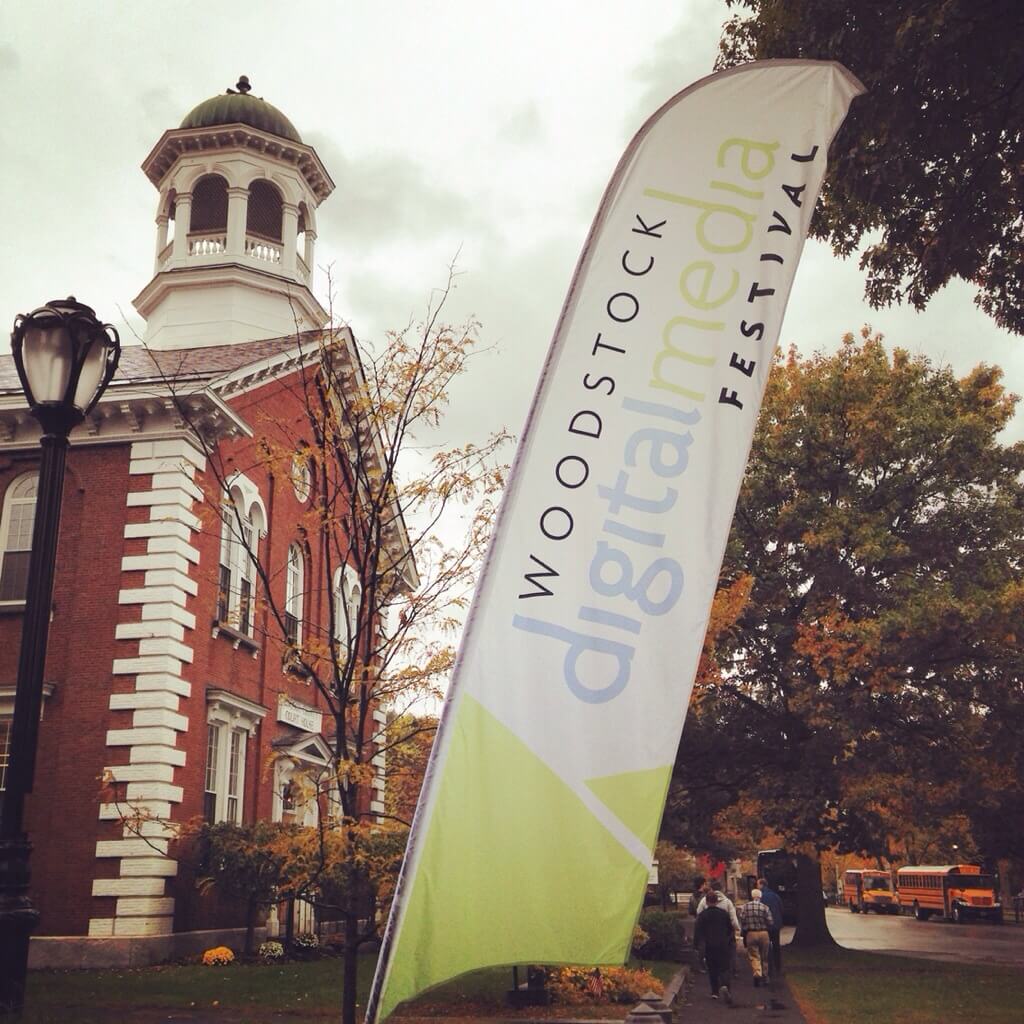 I recently attended the 5th annual Woodstock Digital Media Festival in beautiful Woodstock, Vermont. Although the weather was a bit gloomy, the tiny little town was glowing with bright colors or orange and red and the fall foliage couldn’t have looked more quaint. The bustling town was buzzing with folks from all over state, curious and eager to learn all about digital media in the public interest.

The bulk of the festival took place at the beautiful Woodstock Inn located in downtown Woodstock, as well as surrounding buildings, including the Norman Williams Public Library and the Yonder Offices, all within walking distance of each other. The festival started with a welcome greeting from Don Campbell, WDMF’s head of programming. “You’ve heard of ‘virtual reality’, he said, but have you ever had a chance to put on an Oculus Rift headset and dive in? You listen to podcasts, so what does it take to make and distribute one yourself? Did you ever think of using Instagram, Facebook, and other accessible applications as tools to enrich the stories you tell and grow your own online community?” The first announced workshop sessions for the WDMF address these topics and many more. In several cases, main Festival speakers from across the country will co-host workshops with regional leaders in the field.

First to lead things off, was Dan Archer, who is a graphic journalist who “uses comics and immersive storytelling to report on human rights issues in situations where video or photographic equipment is inappropriate or, at worst, traumatic for those involved. His current work explores the crossover of interactive comics with transmedia storytelling and virtual reality”. Dan is the founder of Empathetic Media and in his workshop , he partnered with Erik Esckilsen, who is the Associate Professor at Champlain College and together, they gave a great presentation on: Transmedia Storytelling 101. Next up, was Suey Park, an activist and writer based in Chicago, Illinois. “She gained prominence through her #CancelColbert and #NotYourAsianSidekick hashtags, and is now working on her first book #TweetPrayLove. She is widely known for her Asian American feminist activism through social media. As a student, Suey Park maintained a digital diary on Twitter. There she would share quick thoughts, observations, and frustrations alongside many of her peers. On a break from working on final essays, she started the hashtag #NotYourAsianSidekick and became an overnight viral sensation, nationally and globally.

She continued to trend dozens of hashtags to change the way Asian Americans are represented by the media. But after #CancelColbert backfired, she faced the dark side of going viral — the hazards that can rear up when our sound-bite driven culture overwhelms critical thinking. In this workshop, Suey will walk us through how we can not only find our unique message and broadcast it into the world, but also how to gain control of our narrative and find meaning even when we lose control of the viral monster lurking in our digital age.” Her workshop was titled: Going Viral with Suey Park.

The following presenters were Franziska Lamprecht and Hajoe Moderegger of eteam – traffic in transience. “At the intersection of relational aesthetics, the Internet and land art, eteam coordinates collective happenings and conceptual transactions between the earthly plane and the realms of the interweb, often reconstructed in hypnotic video work, radio plays, or more recently novellas. Their projects have been featured at PS1 NY, MUMOK Vienna, Centre Pompidou Paris, Transmediale Berlin, Taiwan International Documentary Festival, New York Video Festival, International Film Festival Rotterdam, the 11th Biennale of Moving Images in Geneva, and the International Film Festival Rotterdam, among others.”

They gave a very unique presentation that was quirky and creative. They were my favorite, in part, because I was slightly confused about their message. They left me filled with lots of questions and time to ponder on their proposed question, “What is the difference between absence and disappearing”? The duo put on a workshop titled: Hide and Seek, or The Invisible Image.

Jesse Kriss, who “designs and builds tools for artists, citizens and scientists was next to speak. He currently works in the Human Interfaces Group at NASA’s Jet Propulsion Lab, designing and developing tools for space mission operations, spacecraft systems engineering, and Earth science, while practicing and promoting user centered design. His past work includes Many Eyes, a the collaborative visualization platform, at IBM Research, tools for artists and performers at Figure 53, makers of QLab, and web platforms for online organizing and voter protection on the Obama 2012 tech team.”

He is also the creator of MaxLink, free software connecting Processing and Max/MSP as well as several music-related visualizations including the History of Sampling and Visual Scratch. The fact that Jesse works for NASA, is pretty impressive. His talk was very informative and so interesting. He and his team might have one of the coolest jobs on the planet! His workshop was about: Space, Undersea and the Interstate – Making Robotics Work For Users. Last but not least, was the final keynote speaker Phoebe Judge. Phoebe is the “co-creator and host of Criminal and is a host at WUNC North Carolina Public Radio. She was a producer and on-air contributor for The Story with Dick Gordon, and before that she reported from the Gulf Coast of Mississippi. She covered the BP oil spill and Hurricane Katrina for Mississippi Public Radio and NPR. Phoebe’s work has won multiple Edward R. Murrow and Associated Press awards. She attended the Salt Institute for Documentary Studies.

“I can’t imagine a better way to learn about Podcasting, for example, than to sit down with CRIMINAL’s Phoebe Judge and the digital teams from NHPR and VPR – all in one place and all for free,” stated Don Campbell. The Huffington Post called Phoebe’s podcast “the best new American radio show”, and I agree. Criminal “is about crime. Stories of people who’ve done wrong, been wronged, or gotten caught in the middle.” Her voice is meant for radio and her storytelling is powerful. I highly suggest you give it a listen! Phoebe’s workshop was titled: Podcasting- Studio, Station & Audience In Your Pocket. If you’re interested in seeing the videos of the keynote presentations, they will be available for viewing in early 2016, and we will be sure to update you with where you can find that information. Did you also attend the Woodstock Digital Media Festival? If so, which presenter or workshop was your favorite? Share your thoughts with us!